You are here: Home / History

Bearnock Lodge was originally built as a summer home and shooting lodge for a London based family in the 1860’s. At that time the property came with thousands of acres of land which have slowly been sold off over the years.

Around 1900 the right hand side of the house was extended, this accounts for the strange layout of the house i.e. the small hallway at the front and the staircase leading from the drawing room. During this time the house was owned by the Wallace family, who still have relations living in the area. Anna Wallace became famous in the early 1970’s as the girl who turned down the offer of marriage to Prince Charles. If she had accepted his proposal, Bearnock would not be the secluded and private property it is today.

When the Wallaces moved to Old Corrimony the house was brought by Major Cape and his family, who also came up to the house for shooting on the ‘Glorious Twelth’ each year. Mrs Cape ran a Sunday school at the house for several years during the thirties. The most interesting owner of Bearnock was Lady Sybil Grant, the daughter of Lord Rosebury who served under Gladstone and was Prime Minister himself, briefly, from 1894 -95. Sybil’s mother was Hannah De Rothschild who on the death of her father in 1874, became the richest woman in Britain. As a child, Lady Sybil was said to be a particular favourite of Queen Victoria.

In 1903, Sybil married General Sir Charles John Grant, who was a member of the famous Grant Whiskey family. By 1914 Lady Grant was one of the leading literary figures of the day, as well as becoming the official photographer to the Royal Naval Air Service. Later in life, when Lady Grant purchased Bearnock Lodge she started to become somewhat eccentric. She took offence to the colour of the stone mullions at the front of the house, because it reminded her of a childhood medicine. She had all the front of the house painted white and obliterated all the features. She also painted the panelling in the drawing room blue. Additionally there was a lovely latin inscription over the front door welcoming guests to the lodge – but this she also had swiftly removed. Lady Grant was known to live in trees in later life and bellowed instructions to her servants through a megaphone.

Lady Grant divided her time between her homes Pitchford Hall, The Durdans in Epsom and Bearnock Lodge. She would travel between the three homes in a converted horsebox towed by a Rolls Royce, which was driven by the family chauffeur.

After the war the house had various owners and started to fall into disrepair. At one stage it was going to be a hotel, another time an art exhibition centre but these ideas came to nothing.

In the early 1970’s the house was purchased by the Janneys who set about restoring many of Lady Grants ‘alterations’ and planted hundreds of trees on the grounds. However, this was a huge task and much of the back section of the house remained in disrepair for many years.

The Sutherland family purchased the property in the summer of 2009 and set about bringing the house into the 21st century – mains water was added to the property, central heating was reinstalled and it was completely rewired. Walls were moved, bathrooms were added and the former kitchen was turned into a modern kitchen/sitting room.

During 2011, the formal garden was restored (back to its hey day in the Victorian era) and a new apartment was added over the garages which provides a sitting area overlooking the waterfall, which was previously hidden from view.

“Just returned after a long weekend! It is AMAZING. Decor, location, surroundings are all stunning. 8 adults 4 kids did not see kids there had their own space as did the adults. Gathering together in the evening lighting the fire was the highlight of the day! “ 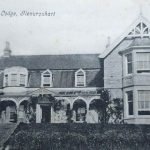 If you’re looking for historic holiday accommodation in Scotland, welcome to Bearnock Lodge. While not a historic castle, the house still has a wonderful tale to tell. Owners have included the Wallace family, who still have relations living in the area. Anna Wallace became famous in the early 1970s as the girl who turned down …